We are currently road tripping through France, Andorra and Spain.

This is a holiday that we have been planning for around a year – possibly longer!

Amos is not with us for the trip as he is classed as a banned breed in two of the countries we are visiting, that coupled with the fact he would find the whole trip insanely stressful it wasn’t fair to bring him.

The trip was planned before Amos came to us and I researched before we fostered Amos the possibility of him coming with us, as he is unable to I had sorted his own ‘mini holiday’ months ago to make sure he was going to be happy and comfortable whilst we were away. 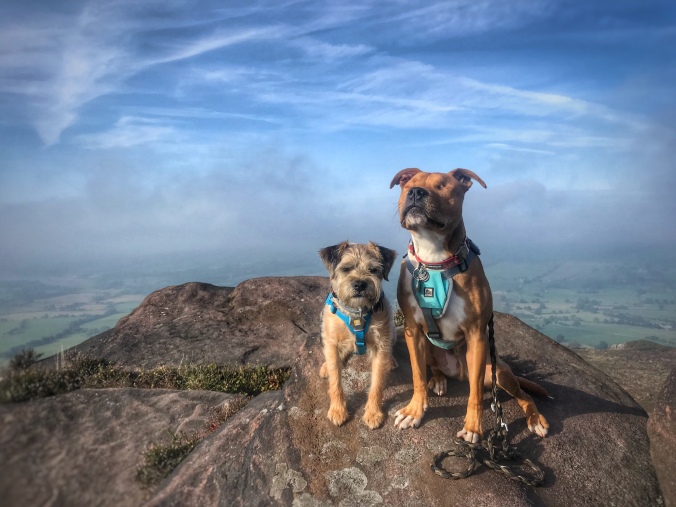 Of course we miss him, but in the big picture this trip would have been too much for him to cope with, too many new sounds, smells and locations to familiarise himself with and would have had a negative impact on his overall confidence which we have been working on for months!

Our trip started nice and early on Wednesday morning when we left home at 2:00am 😫 to drive to Folkestone to get on the EuroTunnel.

We took the driving in turns to get to the tunnel as both the humans were exhausted! So we took regular breaks and naps 😊

After a very long morning in the car we arrived at Folkestone a couple of hours early for our train, we were moved to an earlier train (at no extra cost! 🎉) so had an hour or so to kill.

The Eurotunnel has an amazing dog play area, and even has a separate one for females in season – I was amazed, I found it incredible, there is a little bit of agility equipment that people can use and a fenced in area to let your pups have a stretch of their legs.

The Eurotunnel was an experience – I didn’t like it much, we were parked near a window and the movement of the train but not the car really messed with my head!

Once we arrived in France we had another 5 or so hours in the car until we got to our first stop in Orléans.

It was such a long day that by the time we arrived at the hotel, we took Toby for a walk in the town and then went straight back to the room to catch up on some well deserved sleep! 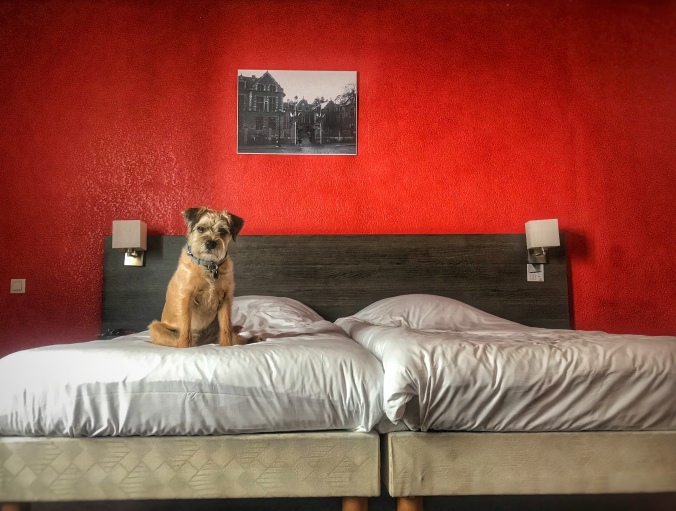 We had a little mooch around Orléans the next morning before we set off on the next leg of the trip, which was making our way to Andorra!

We decided we would stop on the way in Toulouse – it was a disaster! The plan had been to spend an hour or so mooching around, letting Toby stretch his legs and is stopping somewhere for a bite to eat. We instead spent over an hour in standstill traffic! We did have loads of fun people watching though – so every cloud and all that!

It was also the scariest place to drive as people just zoomed past on bikes/ mopeds and cars just cut each other up constantly – Billy did an amazing job of driving us though and we eventually (when we were safely out of Toulouse) stopped to get snacks at a petrol station!!

We carried on our merry way to get to our next stop which was in Andorra, unfortunately the delay in Toulouse meant that we were a smidge behind schedule, so we ended up driving the most crazy mountain roads in the south of France in the dark, which was a frightening experience! The silver lining was it meant Andorra was lit up when we arrived and it looked beautiful!!

Our hotel in Andorra was fabulous, very dog friendly (€8 extra a night got Toby to stay) but he was able to come and sit in the restaurant with us for all our meals and was made very welcome by all the staff.

Our day in Andorra was spent exploring and climbing, there were a number of walks from the hotel, which I had wanted to try, the waterfall walk seemed the best bet as it meant we were always close to water to help keep Toby cool.

It wasn’t too hot in Andorra, but I obviously wanted to ensure Toby was coping with the weather. 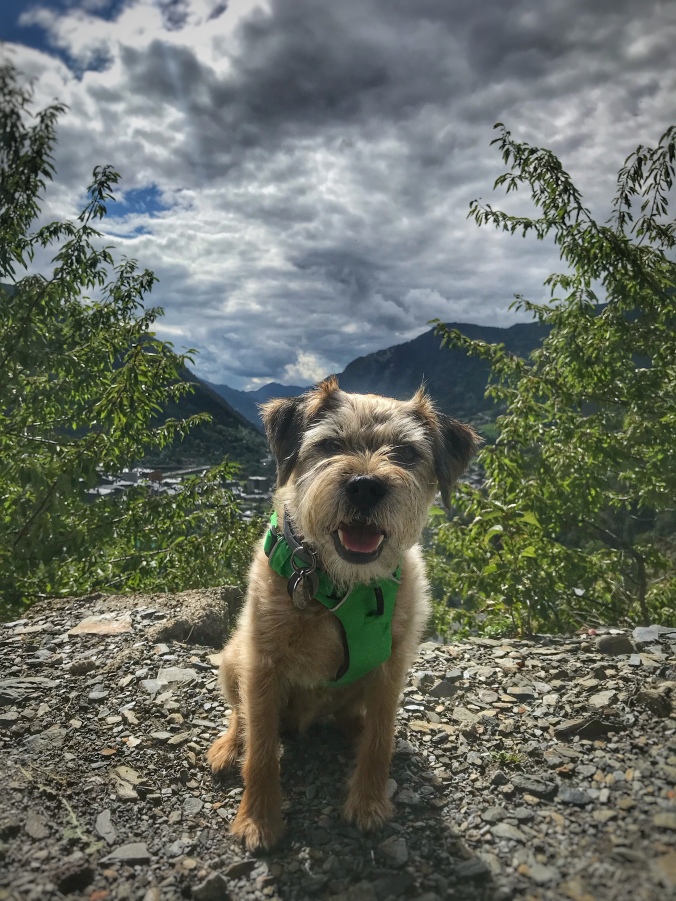 We had a beautiful walk, the scenery was just incredible and utterly breathtaking. 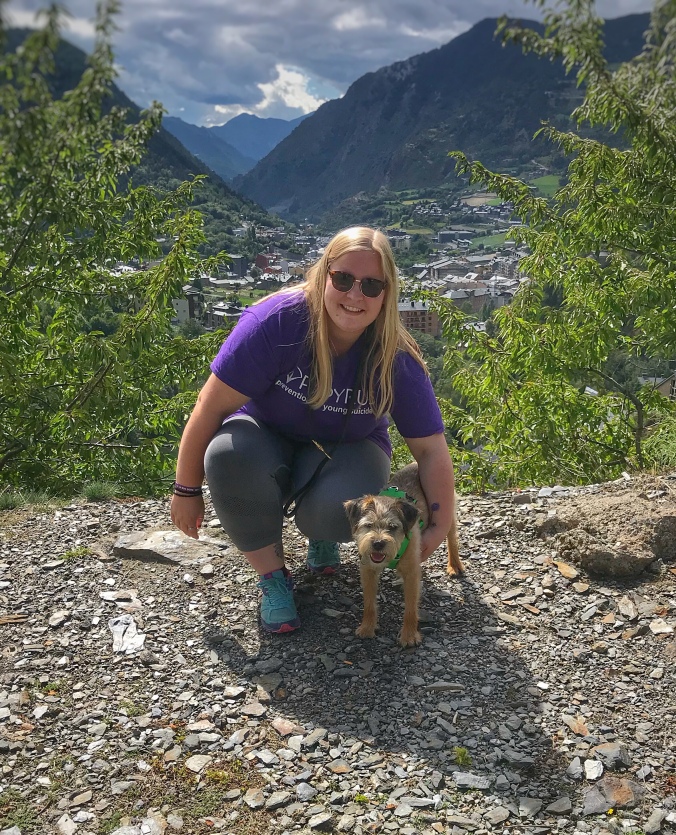 The afternoon in Andorra was spent in Andorra La Vella, which was an experience in itself! 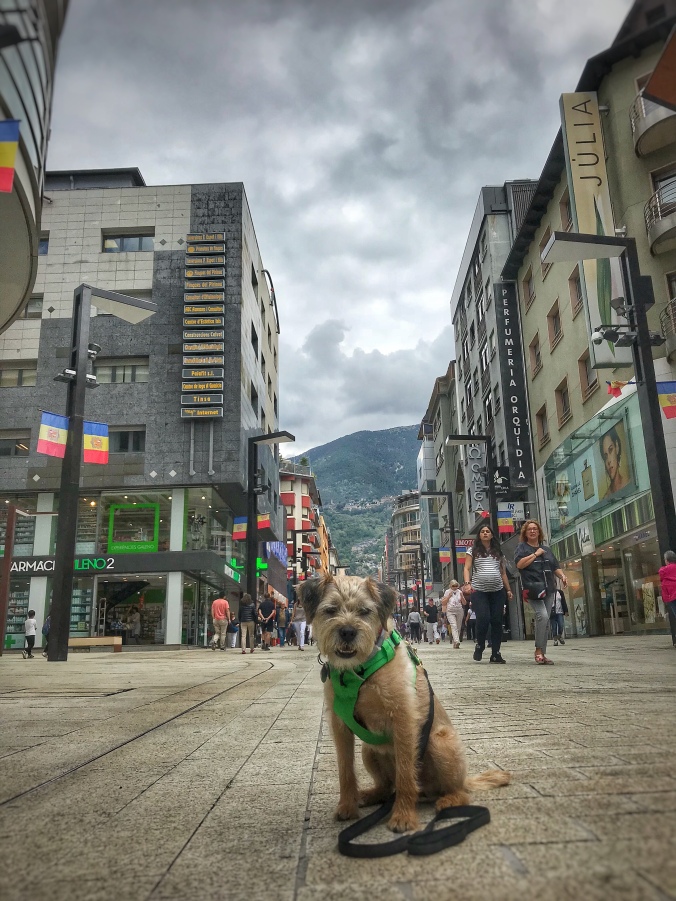 Some of the shops weren’t dog friendly but there were quite a few that would allow dogs inside which made a nice change from home! 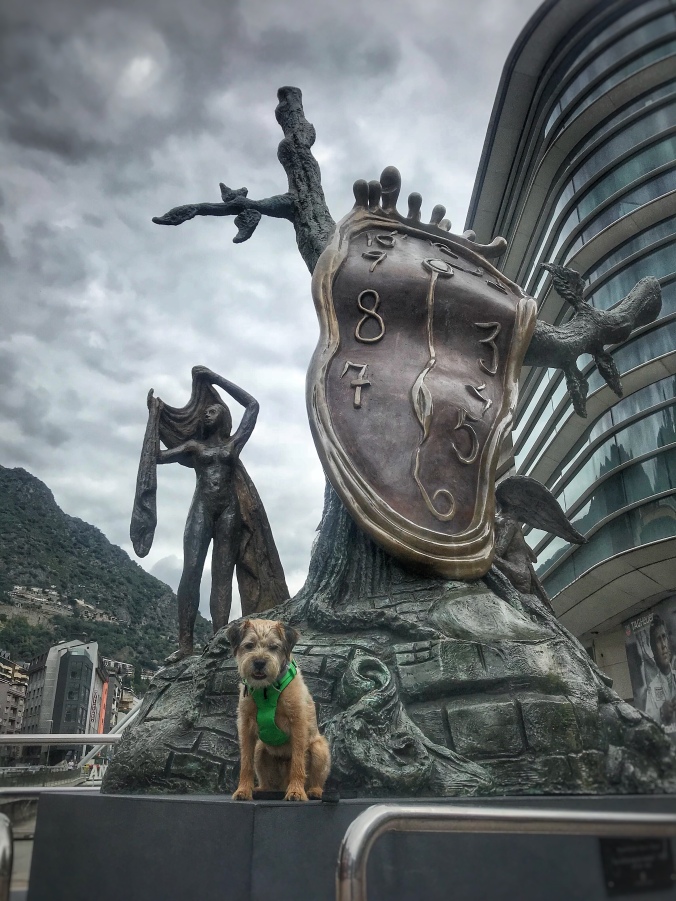 It was a beautiful area to walk around, if you wanted to walk in the countryside or in a more urban setting, there were plenty of places to stop and get food where we would have been able to sit outside with Toby, we decided again getting food in Andorra La Vella as the food at the hotel was gorgeous! So we decided to head back for something to eat! 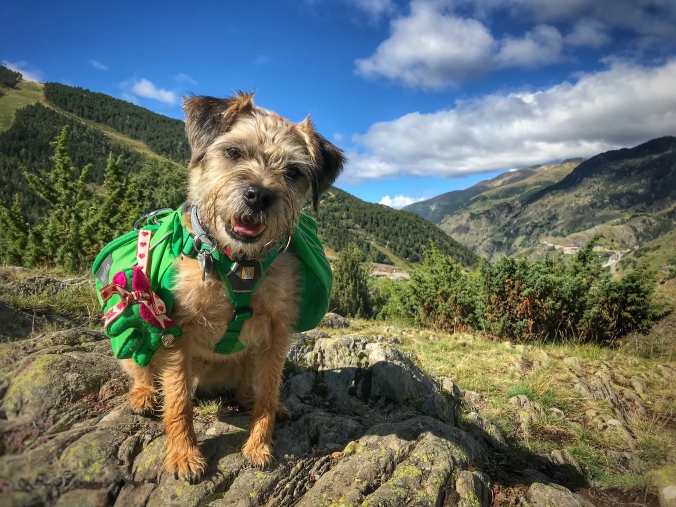 Our final morning in Andorra we went for another little explore around the local area and let Toby have a good stretch of his legs before the next leg of the journey – to Spain!!

From Andorra to where we are staying in Spain was another 6 hours in the car, Toby has been doing amazingly well in the car, he’s great at travelling – he just doesn’t sleep, so a day in the car is very tiring for him, he spends all day looking out of the window pretty much so when we arrive somewhere he is usually very sleepy!!

We take lots of breaks for humans and pooch to have a stretch of the legs, snacks and drinks which has made it much more manageable for Toby as he gets a break from staring at scenery 😂 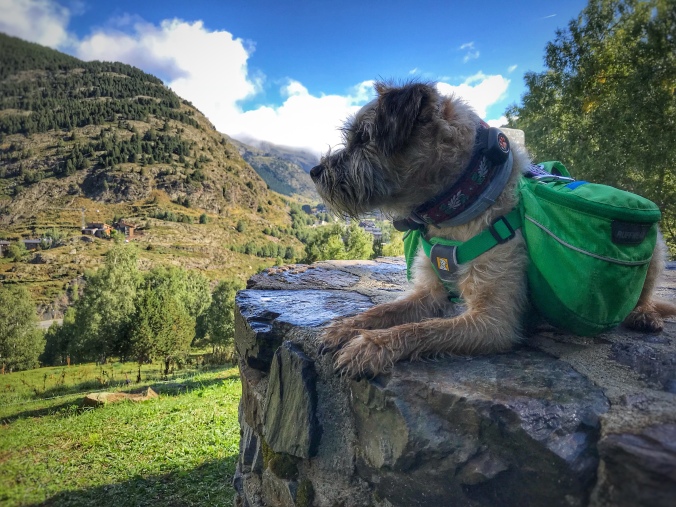 When we arrived in Spain our first priority was of course a walk to the beach!

In Spain we are staying with my Mum and Dad, so are lucky enough to have two built in tour guides for this stretch of the trip!

Whilst Toby and I wandered off to the beach with Mum, Billy and Dad stayed back to unpack the car! 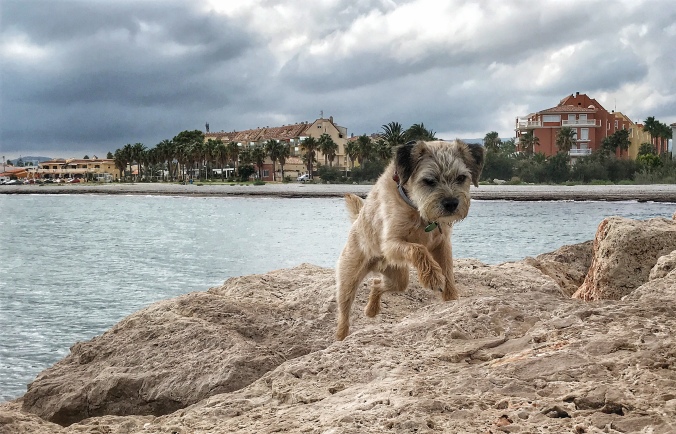 The beach close by is so beautiful, it’s a pebble beach (which doesn’t bother Toby at all) which eventually turns to a sandy beach, which is walkable but can take over an hour to get to, Toby is still adjusting to the heat out here so I didn’t want to walk him that far before he then got a run on the beach initially, he’s getting much better with the heat however, he just needed a little time to adjust!

That’s all for leg one of the trip … we’ll post another blog soon with the day trips we have done whilst in Spain!